The Umm Al Quwain Chamber of Commerce and Industry received a delegation from the Serbian Businesswomen Council headed by His Excellency / Sandra Abramovich, the Council and a number of members, during their visit to a number of emirates of the country with the aim of opening up areas for investment and economic development. Then the Amco Apparel Factory for the manufacture of textiles and ready-made clothes in the free zone and to know the mechanism of its work, production, and distribution, and then the visiting delegation went to the chamber’s headquarters to meet with HE Khalfan Misfer, Chairman of the Chamber’s Board of Directors, to review the Chamber’s most important achievements and initiatives in addition to discussing future ways of cooperation, and discussing Exchange of economic and trade experiences, and at the end of the meeting, His Excellency the President of the Council was honored. The visit also ended with a lunch banquet in honor of the delegation, which expressed its admiration for the

emirate and emphasized the need to encourage mutual investments to achieve the strategic partnership between the two countries.
The delegation was received and toured by HE Aisha Rashid Leitim, member of the Chamber’s Board of Directors, Chair of the Umm Al Quwain Businesswomen Council, in the presence of His Excellency Dr. Shafiqa Al Ameri, Executive Director of the Abu Dhabi Businesswomen’s Office, HE / Moza Hatim Al Shamsi, First Vice President of the Council, and HE / Nabila Mohammed, member of the Board of Directors, and Ms. Yasmine Azhari, Member Emirates Women’s Council. 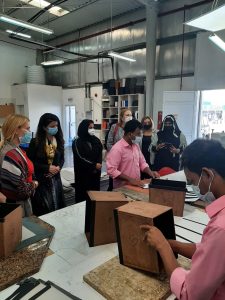 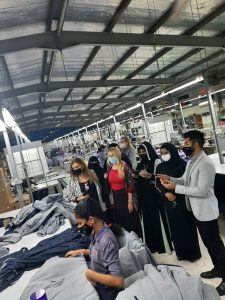