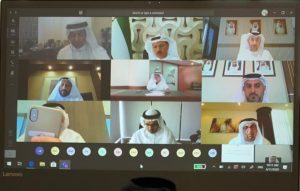 the Chamber and His Excellency / Abdullah Khamis Al Suwaidi – Director General of the Chamber, participated in the meeting held under the chairmanship of His Excellency the Minister of Economy / Engineer Sultan bin Saeed Al Mansouri, to discuss the initiative launched by the Ministry on the implementation of initiatives to support the economy and increase Economic incentives and faster recovery from the damage caused by the Corona pandemic. The meeting was held remotely in the presence of all the presidents and directors of the chambers of commerce, during which proposals related to the objectives of the platform launched by the ministry and its supervisory bodies and divisions and the mechanism for submitting applications by projects through this platform were discussed and proposals were presented and the importance of the role of the chambers and economic development departments in the success of this initiative.